Examination periods have passed, and the cadet Pere Knezevic, instead of a well-deserved vacation in his native Zadar, with riot gear, barely noticeable in dense vegetation on Gasince, in anticipation of the “enemy” attack. Not far away, cadet Ana Luketic, on the other hand Tan Thai, a fellow of the American military. He began to attack, shoot it from all sides. “Ceasefire, ceasefire,” can be heard from a distance. “A cease-fire!” Alternate commands in English and Croatian. The leader of your wounded. Where do you dispose of the wounded, heard the gunfire instruktorov voice. Search … the cadets to make a decision, take responsibility. He explained to us that Captain Andjelko Rimac commander of Camp 2 in which the training of 44 Croatian and American cadets.

Camp 2 means three weeks of intense and grueling training during which the emphasis is on developing basic skills to lead and command the implementation of tactical activities and tasks. Training is carried out first Company TRAINING Battalion of Infantry Regiment of the Training and Doctrine “Fran Krsto Frankopan”. In the first week of training was shooting, and then continues with tactical tasks attack, initiative and rush, infantry squad in the implementation of the ambush, reconnaissance patrol … At the end of the three-day Campsite. It is in the tens of where our six and

three American cadets. During the training, cadets are explained Captain Rimac rotate in all positions – leaders, commanders and dozens finally platoon commander at the loading cadet during training showed the most leadership qualities and he’s ready to take responsibility, to solve the problem.

“Cadets at each camp showed great interest and motivation,” says Captain Rimac and adds to them, although the hardest, most challenging pitch your tents in which to show their contestants. Training is carried out of ten instructors first company TRAINING Battalion Infantry Regiment Training and Doctrine with rich experience.

The cadets of the Military Academy at Gasince and fifteen cadets of the Armed Forces of the United States with which cooperation takes place within the CULP program. Captain Rimac content of this cooperation is that, year after year, all the better. “I am very pleased. Think it’s good that at this early stage of training our cadets organized this kind of international cooperation.’s Their good preparation for the duties which, as future officers, to perform in an international environment.” All tasks jointly paying off, no problem communicating, and both sides stand out as a great benefit sharing experience. Confirmed this and Tan Thai soldier who was in Croatia for the first time. “This is a great experience. Coordination is excellent, and this type of training, co-operation and cohesion of soldiers of different armies. This all contributes to a better mutual understanding which will be of great benefit in the future if we worked together on a task in another country . ”

While the cadets at Camp 2 to prepare for the new complex tactical actions on the area “Gašinci” At the same time, but at camp 1 trained by their slightly younger counterparts, cadets who have completed the first academic year. They had just returned from shooting. A little tired, but happy 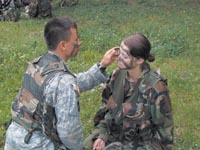 because the shooting went well. “This is their first camp where they spend training and I have to admit that the commitment shown by the high level,” said the commander of the camp one 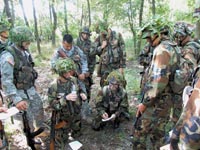 lieutenant Marinko Laštro the Military Academy. Camp one is composed of three phases. Within the first on Gasince in which all participating cadets, conducted basic military training, training of infantry weapons, orientation, topography, tactics, preparation and shooting exercises. After two weeks, the cadets go to basic training in the naval barracks “St. Nicholas” in Split, and the third phase is the training branch. Already in this first phase cadets showed great interest in the training. Confirmed this sergeant Dalibor Zug, senior instructor at the Center for Basic Training PoĹľega, one of the instructors at the camp are first motivated, have the necessary enthusiasm to bear every soldier. As more time goes by, they are all capable. They do not need a lot of repeating. It’s nice to work with cadets. ”

“This to me is in every respect a new experience. In this way, builds cooperation and cohesion between soldiers of different armies, all contributing to better mutual understanding. We share our experiences. The instructors are very good. They have a great tactic, trained us step by step and very clear. This us a great opportunity to build new friendships.”